Don’t Forget the Operator! – The importance of proper training with new systems

Home / Don’t Forget the Operator! – The importance of proper training with new systems

Don’t Forget the Operator! – The importance of proper training with new systems

Recently, I was at a customer site for a project startup. As I watched the operators going about their day (interacting with both our newly supplied HMI and some preexisting screens that we hadn’t developed,) one incident really caught my attention. An operator pressed a button on screen to open a valve. Nothing. He pressed again. Nothing. After a third attempt, with the same results, he walked over to the valve and opened it by hand. He went on to explain that this was a relatively common occurrence- the button had always seemed to be temperamental. I began investigating their code to see how this button actually went about opening the valve. It turned out there were 6 different conditions, at least one of which had to be met, for the button to have any effect. I could find nothing on the screen, however, that gave any indication this was the case. The button looked and behaved exactly the same way, whether the conditions were met or not. When it didn’t work, there were no messages indicating why. As far as an operator could tell, it was just a software glitch.

Before we left, I met with the operators to get their feedback on the new system we had installed.  One of the things that they appreciated most was how clear everything was. We did this in a few different ways. On the buttons themselves, we put indicators so they would know when they could or could not use them.

They also had access to a popup window with the list of reasons as to why they couldn’t use them. 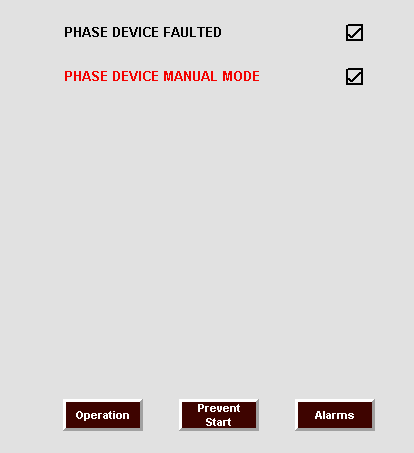 By showing the operator as much information as possible, without overwhelming them with unnecessary details, we were able to make their transition to a new system as easy as possible.

This situation serves as a good reminder of something that can be easily overlooked when developing a project. That is, don’t forget the operator. Often times, projects are designed and developed without actually talking to the end-users. Project success hinges on acceptance of a new system by everyone- not just management. Including operator input as part of your project plan allows you to deliver a product that is not only useful, but more importantly, user-friendly.

That’s the way we approach things, do you agree or have a different approach? Would love to hear it!