‘Twas the night before Shutdown

Home / ‘Twas the night before Shutdown 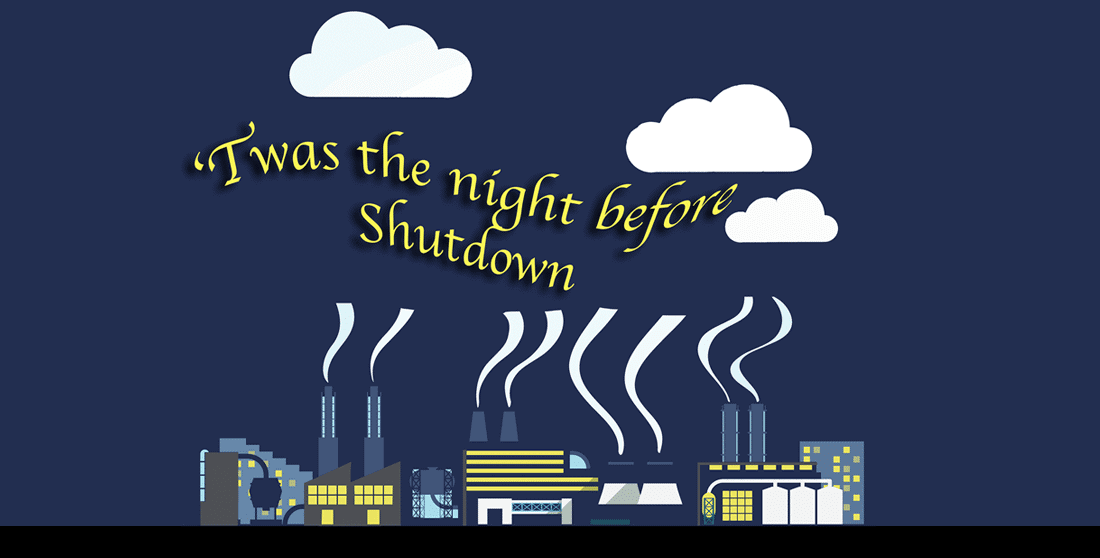 ‘Twas the night before Shutdown

‘Twas the night before Shutdown: I tell you, my dears,
All of Avanceon was stirring – (they are engineers)
Their stockings were snug in their shoes on their feet,
As there was a new project deadline to meet.
Not one thought of sugarplums — No, quite instead
Strange visions of programs danced in their heads.
The team was all nestled quite snug in their code
All wanted to finish and get on the road….
While Tracey was focused on the perfect MES
And Scott was pushing for one more pre-test,
With Matt stuck in meetings, and Brian with SCADA
We all saw our Holidays getting consumed by the data.

Then out on Sheree Blvd., we heard such a clatter
We rushed from our cubes just to see what’s the matter –
On what did our wondering eyes start to see?
But a jolly old elf in a shiny RV!

He jumped on the rooftop! (that’s just how you do it)
And climbed down the chimney – just slid down right through it….
And brushed off the soot, wiped the grime from his face
And all of us stood there in wonder, in place,
And what was most startling, and certainly weird —
The guy kind of looked like Bob Z. with a beard!
His eyes kind of twinkled – his voice did the same
When suddenly he called the staff out by name!

“On Sara! On Mike! On Phil and Cobb!
On Gillian & Joe! You’ve done a great job!
On Michele and Mary! On Ben and Joe!
On Nicholas and Bryan! Up and away we go!
On Alaina & Tara! On Chris J. Komatic!
It’s time to get happy! Get wild and ecstatic!
On Steven and Chris! On Kim and Sue
It’s time to go home! You know what to do!

Your code is now perfect! All systems are green!
The recipe’s golden! The FAT plan is clean!
The ICS network has nary an issue
And every last customer’s dying to kiss you!
I worked some small magic – all problems are solved!
All schedules are realized! All problems dissolved!

As we stood in wonder, he gave us a smirk
And said “This place sure is a great place to work!”
He reached in his sack, found a very large beer
And poured every one of us Holiday cheer –
And he said “Now go home! Spend the night with your family!”
Drive safely, there, Shepherd! Say ‘Hi’ for me, Yamiley!
You need to wind down! You have earned a good rest!
You guys have been super; you guys are the best!”

And putting his finger aside of his nose
And giving a nod, up the chimney he rose!
And he sprang on the roof and with nary a word
He jumped down to his RV and shifted to third
We heard him exclaim as he roared out of sight
Happy Holidays to all
And to All a good night!”